About Our Mole Removal & Control Services 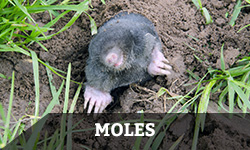 Moles are notorious lawn damaging pests that are capable of destroying a healthy looking yard in only a matter of days. Just 1 mole can dig 20ft of tunneling in a day! No worries, Buckeye Wildlife Solutions is here to help. With our expertise in trapping moles around Columbus, Ohio we are proud to offer effective solutions that work. Whether you have a large mole infestation or you have just noticed some damage in the last few days, give our BWS pro’s a call to get rid of your moles!

We start the mole trapping process by locating the most active tunnels and setting up traps. Mole trapping & removal can be a timely process. Generally speaking the trapping process can take anywhere between 7-30 days to complete, depending on the number of moles. No matter the situation we care about helping our clients achieve a mole-free atmosphere so your family & friends can walk around the yard without having to worry about sinking their foot in a mole tunnel and twisting their ankle! That actually happens pretty often! So call BWS now, or continue reading our page to better understand your mole issues! Our comprehensive services include;

Moles are small fur-bearing mammals with powerful paddle like claws meant for digging through soil very efficiently. Moles are notorious for causing turf damage to golf courses, recreational parks, gardens, crop fields, and lawns. Most moles will range between 4-8 inches in length and are almost never seen, although their obvious tunnels are the real eye catcher. Moles will dig shallow tunnels on the surface in search of food. Their diet consists mainly of earthworms, but will also eat grubs and larvae. Moles birth their pups in spring and early summer. Litters will consist of 2-6 pups. The newborns will not stay under the care of their mother for very long, and will soon claim their own territory. Intricate tunneling systems are the moles way of traveling around. These tunnels not only serve the moles as their personal underground highways, but they will also dig special chambers at the ends of tunnels to use as bedrooms or birthing areas. Chambers can also be used for storing earthworms, which the moles will immobilize by biting off their heads and then storing them in the chamber. The current record for the number of stored earthworms is 470, according to the Mammal Society. Moles are solitary creatures and do not colonize with each other. However, that being said moles find it more convenient to travel tunnels already dug by other moles, so this can attract several moles to a yard with extensive tunneling available. It is a wise decision to hire BWS pro’s to trap before the mole problem gets out of hand! Call us today in Columbus, Ohio & surrounding areas for mole control.

Where Do Moles Go In The Winter?

This is a very common question among our clientele who are having mole problems. Moles can sense when the seasons are changing and things are about to get chilly for them. Many people think moles will hibernate during the winter, which is a common misconception. Instinctively moles will dig far below the frost line and remain active throughout the winter. Moles will not be causing any kind of turf damage during the winter, but they will remain active and create extensive tunneling systems far below the surface. Upon the arrival of spring people will begin to see mole activity at the surface once again. Moles will return year after year if the problem is ignored, and the number of tunnels will increase significantly thus attracting more moles to the property. Contact Buckeye Wildlife Solutions to put an end to your mole problems in Columbus, OH and let us get rid of your moles for good!