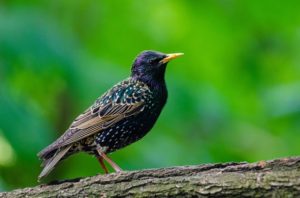 Every year at about this time, birds begin to cause problems for homeowners nationwide. The Columbus area is no exception, and one of the biggest offenders goes by the name of “European Starling.” These are among the most common bird species in America, so it should be of no surprise that they are responsible for a large number of critter removal calls. They are known to camp out in vents and can cause more damage than you might assume capable of such a small pest. The European Starling is pretty evenly distributed throughout Ohio, so larger cities like Columbus will still see an equal amount of activity relative to some woodsier areas.

Can they damage physical damage to my house?

Absolutely. European Starlings, as well as many other species of bird, are notorious for finding ways to hide out in people’s vents. Once inside, they have the ability to live in the vents for as long as it suits their needs. One of the biggest problems associated with bird infiltration is the hazardous potential of their droppings. If allowed to accumulate, bird droppings can damage the structure of your home due to their known ability to deteriorate steel. Over time, this can build up into a major issue and serve as a source of much unwanted stress.

How can these birds pose a threat to my physical health?

The potential for physical harm cannot be taken lightly. European Starlings may carry any of about 60 diseases. Many of these diseases are known to be dangerous to humans. E. Coli and West Nile Virus get the most media coverage, but many others can lead to serious health problems as well. Humans can be exposed to these diseases either through physical contact or more commonly through bird droppings. Furthermore, diseases can be cultivated if droppings are allowed into soil. Birds can also drag along other pests like mites, worms, and bed bugs! There are clearly all kinds of hazards associated with birds, so…

How do I get rid of them?

To keep any more birds from getting in, all potential openings must be identified and sealed off. Anything which could be attracting the birds (usually food) should be removed from the area. If the birds have gotten into your vents, there are a variety of traps available to professionals which will lure the birds out. Afterwards, vents need to be covered and checked to ensure that no structural damage has occurred. Any remaining nests around the area should be removed safely, leaving only the cleanup portion of the job. Cleaning up bird droppings is one of the most important parts things to do. If not done correctly, you could put yourself and anyone else exposed at risk to the hazards mentioned above. Having a bird infestation can mean huge trouble in a small amount of time. Your first step should be to call a professional removal service like Buckeye Wildlife Solutions. If you’re having bird troubles, call the Columbus area’s #1 removal service at (844)-544-9453. We serve locations near Columbus including Dublin, Hilliard, Delaware, Mansfield, and more.