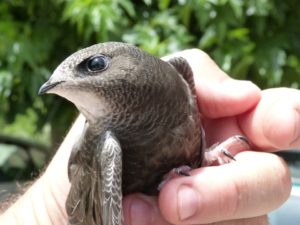 Chimney swifts are small to mid-sized birds known to reside and raise their young in Central Ohioans’ chimneys during the summer. They are colored a dark shade of olive, dispersed uniformly over the body. These birds are the perfect size for fitting their slender bodies through tight spaces – making them a nuisance to those who own fireplaces. The chimney swift’s long wings allowing for quick movement in tight spaces, giving them the appearance of a dart flying downwards into your house. They are native to North America, residing all over the Midwest during the summer months before migrating south for the winter. From Columbus outwards, residents all over the state of Ohio have to put up with these birds nesting in their homes during our warmer months.

The chimney swift is actually very beneficial to have around. When they aren’t bothering us, these birds will eat 33% of their body weight in insects, daily! The species, although beneficial, is in danger of sharp population decline due to a lack of trees to take shelter in. This lack of trees only makes your chimney more appealing to chimney swifts. Don’t allow your household to be susceptible to invasion – call Buckeye Wildlife Solutions at 844.544.WILD!

How Do I Handle Chimney Swift Problems?

Chimney swifts are in a position where their numbers are in significant danger. A federal protection is in place to conserve and replenish the species. The protection act literally makes it illegal to remove chimney swifts from one’s home. Rather, it is the homeowner’s responsibility to allow the chimney swifts to remain in their chimney until the newly hatched birds can fly (about 30 days afterwards). It may seem strange, but the chimney swift’s presence is necessary to keep insect populations under control. We must simply accept the situation for what it is, allowing the birds to reach maturity and eventually leave the nest.

What Will Buckeye Wildlife Solutions Do For Me?

Although we can’t legally act on a chimney swift invasion until they have left your chimney, we can definitely help you prevent future problems! Chimney caps are an excellent option for keeping pests out of your chimney while still allowing the free flow of chimney smoke. The chimney cap is a very simple piece of equipment. It is extraordinarily effective at keeping animals out – and we’ll install it! Don’t put up with seasonal bird invasions, no matter how helpful they may be. Call Buckeye Wildlife Solutions at 844.544.WILD for affordable, effective pest prevention service!