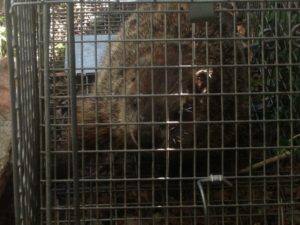 The groundhog, also known as the “woodchuck” or “whistlepig”, often conjures up visions of a squat, grumpy critter.  These large rodents are found in fields, commercial lots, along highways and residential yards.  They prefer the solitary lifestyle, only seeking out other groundhogs to mate between March and May in Ohio. When they sense any sort of danger, they like to let out a bark or a whistle (thus the whistle-pig nickname), and head for the solitude of their burrow. Oddly enough, they have also been known to climb trees when necessary to avoid predators. Groundhogs would prefer not to have any interactions with humans, but sometimes this cannot be helped due to their habitual lifestyle choices. Management of these animals is important to avoid the hazards they can pose to your property, which is why we offer groundhog removal.

Groundhogs live in burrows beneath the ground. They excel at crafting these burrows, and throughout their life can create an extensive network of tunnels. The entrance to their den will have a large pile of dirt in front. Tunnels can be dug up to 45 feet and have multiple chambers within. The chambers are used for storing food and also for birthing offspring. When continual groundhog damage occurs in a field used for farming or in the family yard, it can be irritating and cumbersome. Humanely trapping groundhogs is the best way to handle these type of issues.

Groundhogs are Ohio’s only true hibernating mammal. They remain dormant in their underground burrow from late November/December until the first warm days of spring arrive in March/April. During the hibernation period groundhogs will survive solely on the body fat that was stockpiled in the fall. During these dormant periods their bodies almost completely shut down, with the physical effects being slowed breathing & delayed respiratory functions. This is to burn as few calories as possible. Their bodies must sustain the adequate amount of calories until spring, or else the animal would die of starvation and exhaustion.

Spotting a groundhog in your yard occasionally may not indicate a burrow. They may just have found an enticing patch of grass or clover.  Frequent sightings indicate their den is not far away, and you should keep an eye out to make sure it hasn’t burrowed under your deck, patio or behind landscaping bushes. Groundhogs are also notorious for raiding gardens and burrowing up against foundations. Extensive burrowing up against the foundation can cause water entry issues into the basement and often allows them entry into the lower crawlspace area. Trapping & removal of groundhogs is recommended when they have chosen to dig in close proximity to the home.

If for nothing else, we can be thankful for the groundhog every February, and his prediction on the arrival of spring! Every February 2nd, we watch for him to awake from hibernation and exit his burrow, to see whether or not his shadow appears. We are hoping this year will yield an early spring so we can get to critter chasing ASAP!!

About The BWS Methods For Groundhog Removal

Buckeye Wildlife Solutions is a company that cares very much about the humane treatment of these animals. We have a background in preserving wildlife but more-so in management. Groundhogs are no exception to any nuisance animal. If the problem is left unaddressed the damage will only become worse. That is why our pro’s at BWS are here to offer a humane approach to groundhog removal with the notion of managing the issue with efficiency in time and without causing unnecessary harm or stress to the animal. Call the BWS team to humanely put a stop to the nuisances!