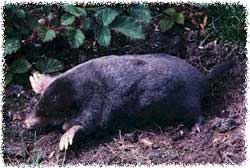 One of the most common wildlife species that is dealt with around central Ohio is the mole. While moles are not typically able to enter into homes, they can cause significant damage to yards, mulch beds and gardens.  Their damage is in the form of tunnels just below the surface and “volcano mounds” or “mole hills” of soil throughout the yard.  They are active all throughout the year, but their peak damage typically occurs between April and September.  The two most common moles we encounter are eastern moles and hairy-tailed moles.  They both are relatively small (4-7 inches), have very soft grey/brown fur, large front feet close to their face, and long claws.

Moles feed constantly, consuming up to 100% of their body weight throughout the day.  Their diet consists mostly of earthworms, insects and vegetation.  They have a thin layer of skin over their eyes limiting their visibility.  Most of their sensory comes from smell and touch.  They typically have one litter per year between April and June with 2-5 young.

Buckeye Wildlife Solutions offers two mole management plans, but the main method of control is trapping.  Trapping for moles takes persistence and practice.  Our technicians have years of experience in mole control, but are also available to give advice on how you can do it yourself.  Several styles of traps are available online, but the most common are the “spear type” and the Victor “Out O’ Sight” traps.  Traps are strategically placed around the yard under ground to intercept moles along their travel routes.  Mole hills can also be shoveled off the grass to prevent the dirt from blocking out the sun and killing the grass in patches.  One common misconception is that the presence of moles is due to the presence of grubs in your yard. While moles do feed on them, grubs represent only a part of their diet.  Treating your yard for grubs will not eliminate your mole problem. Sonic repelling devices, chemical repellents, flooding, chewing gum, gassing, and physical barriers are often attempted by homeowners, but are generally ineffective at controlling this species.